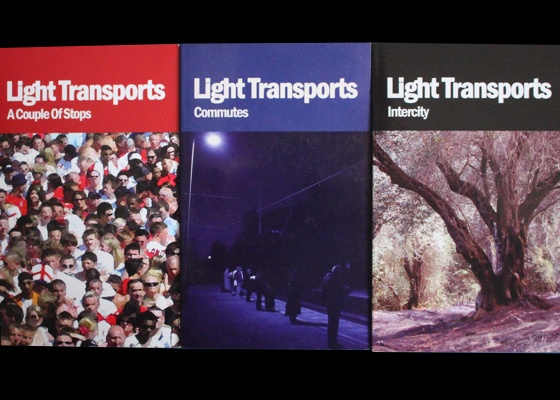 Light Transports were journeys within a journey, reads to get from A to B via somewhere else.

I commissioned or sourced journey length stories lasting either a couple of stops – reads of around ten minutes – a commute – twenty minutes reads – or intercity – lasting thirty to forty minutes. In October 2006 the books were distributed free  to rail travellers on York, Hull, Leeds, Bradford, Sheffield and Ilkley Stations, and sets of the books were given to all library authorities in the Yorkshire and Humber region.

I was conscious of the rich reading that goes on on the trains I catch and was fairly sure many of those readers would know nothing of Yorkshire’s rich literature ecology: writers, publishers, festivals, writers who come to work here.  While many people take pleasure in sourcing food locally, they might not have the knowledge to do so with their reading.

I conceived and produced the project and edited the books with the help of Ian Daley.  You can buy a set of all three at route online, they’re also available on Kindle.  The project was funded by Illuminate, supported by the Millennium Commission.  The writers included are Winifred Holtby, Tom Spanbauer, Mandy Sutter, Steven Hall, Ellen Haggan, Chenjerai Hove, Kath McKay, Alecia McKenzie, MY Alam, Jack Mapanje, Sumeia Ali, Storm Jameson, Mark McWatt, Patricia Duncker and Aritha Van Herk.